First Anna Vogelzang was supposed to play the Green Line on Aug. 9th, but she's opening for Amanda Palmer in Chicago the night before and couldn't make it, so She's going to play my house on the 10th. If you want to come to the show, email for details. Seating is very limited. 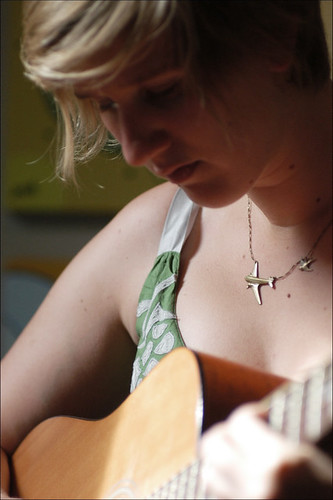 Here is A sad and beautiful song she wrote about Paris Hilton I kid you not. The first time I heard it I was like "Holy crikies! Paris Hilton is a human being too!" -- sad to say I needed to be reminded.

trillian_stars and I were sitting down to watch Book of Secrets yesterday when Vitalij banged on the door. "Kyleovitch!" he says, "come on down to the bar! We're hanging out!" So Trill and I scooched on over to the Watutsi with him and sat around and chatted about fun things. (Many great plans that I cannot reveal yet.) And he said something like this:

"Dude, you played Carnegie Hall and you didn't tell us?"

I got email from Brian Viglione this morning saying that there's an article about him in DRUM! magazine and another one in Modern Drummer both of which just came out AND he said "We're crashing at some guy's house in Germany and he has your book on his coffee table."

How cool is that?
Collapse